Light therapy has floated to the top of the list as a promising treatment for Parkinson’s after reviewing results of my 2022 Parkinsons Recovery holiday survey. A surprising number of respondents to the survey reported that low level laser light therapy (or photobiomodulation) helped them celebrate relief from their symptoms.

Light therapy is not new. It has been researched under a variety of terms for over 40 years: low level laser therapy or LLLT, laser biostimulation and most recently photobiomodulation. This noninvasive therapy has been used in clinical practices to treat healing-resistant wounds, ulcers, pain and nervous system injuries. More recently it is a therapy that has attracted the attention of researchers as a therapy for Parkinson’s and Alzheimer’s.

The interview clip below is with Dr. Lew Lim, the CEO of Vielight that has developed several photobiomodulation devices.

A July 2018 a University of California San Francisco study conducted by Linda Chao PhD offered compelling support for its application to treat dementia. Eight adults diagnosed with dementia participated in the study. Four subjects received 12 weeks of self-administered photobiomodulation treatments in their homes. Four were assigned to a control group. Treatments were administered using a commercially available device (Vielight Neuro Gamma). Outcome measures were assessed at baseline, 6-weeks, and 12-weeks.

Findings revealed significant improvement in cognition and functional connectivity. Dr. Chao concluded that photobiomodulation therapy is a safe, non-pharmacological therapy that can be used to treat patients in their homes.

Results of this study are indeed impressive. Large samples are typically required for a study to show significance. Despite its small size, this study showed significant results.

Below Dr. Lim why photobiomodulation is an effective treatment for dementia.

Individuals who responded to the 2022 Parkinsons Recovery survey reported that photobiomodulation (or low level laser therapy) was one of the top five therapies found to be most beneficial. This finding is backed up by a series of research research studies that focus on the beneficial effects of photobiomodulation for individuals diagnosed with Parkinsons Disease. Visit the link below for a listing of these study abstracts:

Since diffuse light does not easily pass through the skull, Dr. Lim’s had the brilliant idea to pass the light through a device clipped to the nose. Now, in my book of creativity, that is inventiveness at its best!

Click the image below to hear the interview and learn more about Dr. Lim’s new photobiomodulation device called the Vielight Gamma. 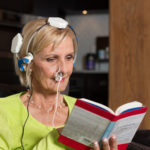 It would seem at this early stage that you cannot go wrong to be open to allow light to shine brightly on the surface of your body and of course your retina!

What has been the experience of persons with Parkinsons symptoms who have been using the Vielight Gamma Device?

Thus far, several hundred persons who listened to my interview on the Vielight device purchased the neuro gamma device using the 10% discount coupon code (healing4me) Dr. Lim provided to listeners of my Parkinsons Recovery Radio Show interview. Those who acquired the device were invited to return the device to the company for a 80% refund after using it for six months if it did not offer relief from their symptoms.

The company reports to me that 10% of the Neuro Gamma units have been returned. One estimate of effectiveness is that approximately 90% of users are satisfied it helps address some symptoms. The odds are certainly in your favor that the device will be beneficial. Know also that it does not help everyone.

I have also heard from a member of my audience who is connected with a wide community of persons with Parkinsons symptoms. He reports that virtually all users experienced welcome relief from some symptoms. For some, the most pronounced results were seen in the initial 4 months or so, after which the improvements tended to level off.

Informal feedback from users who are members of my audience is captured below:

Of course, it is difficult for people diagnosed with Parkinson’s to attribute an improvement in symptoms directly to the Vielight photobiomodulation therapy when they are taking advantage of other therapies at the same time. Reports above are a general summary of the informal feedback I have received in emails and phone conversations. One person told me it did not offer them the relief they had expected and returned the unit.

Like virtually all natural therapies I have documented over the past several decades, the Vielight Neuro Gamma device will not help everyone. Odds do appear to be in your favor if you decide to try it out.

Dr. Lim has has also invented a device called the X-Plus which delivers light directly to the mid brain. This device is designed to send light to the midbrain which is the location of issues associated with Parkinson’s symptoms.

For more information, visit the Vielight website. If you decide to try out the Neuro Gamma device, be sure to tell them you are a member of the Parkinsons Recovery audience and they will apply a 10% discount (coupon code healing4me) when you order. https://www.vielight.com

1 thought on “Light Therapy as Treatment for Parkinson’s Disease”