I have been blogging for years about the role intoxication with heavy metals plays in causing symptoms of Parkinson’s disease. One of the Seven Secrets to Healing is to get the “bad stuff” out of your body before pouring any “good stuff” in. Â Veterinarian Hanne Koplev’s story posted below is a compelling confirmation of how intoxication with heavy metals crashes the neurological system. Better yet, purging the heavy metals has a profound impact on reverse the symptoms.

Dr. Koplev sent me a picture of her to post which says everything about her own recovery from symptoms associated with a diagnosis of Parkinson’s disease. 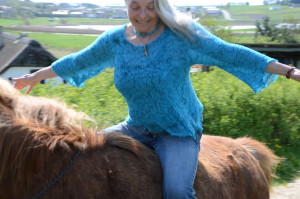 A neurologist recommended in the year 1998, that I should be medicated against my tremor, but I said no thank you to his offer, as I preferred to be better diagnosed before starting medication.

The following year my symptoms increased, as I became more rigid and my tremor got worse and I therefore was easy to persuade by a new neurologist to try anti-Parkinson medication. Shortly after, IÂ was scanned for Parkinsonâ€™s disease and the result was compatible with the diagnosis of Parkinsonâ€™s disease in the early stage.

Parkinson medication helped to decrease the symptoms, but soon IÂ experienced moreÂ severe symptoms. At first I thought that it was the diseaseÂ becoming more severe and this was confirmed byÂ my neurologist whoÂ told me that it was unavoidable.

After one year on medication my neurologist recommendedÂ that IÂ stopped medication before the next consultation. This became the start of a new phase in the way I coped with my disease, as without medication, I experienced that:-

-Â Â Â Â Â Many of the symptoms, that I thought were Parkinsonâ€™s symptoms, were in reality side effects of the medication.

Therefore I decided to accept the symptoms of the disease instead of beingÂ burdened with adverse side effects of the medication. The outcome ofÂ this choice forced me to search for factors, which had influenced my symptoms.

In the year 2001 I was tested for Heavy MetalÂ ToxicityÂ in a private clinic in Aarhus, Denmark by Dr. Bruce Kyle (www.holistic-medicine.dk) and I was diagnosed with a combined toxic overload with mercury and copper.

I was treated at Dr. Bruce Kyleâ€™s clinic with the Chelating Agent DMPS, with Vitamin-C infusions and different kinds of antioxidants and nutritional support. At the same time IÂ had my amalgam fillings removed and had non-toxic, non-metal composites instead. This was done by a dentist with extra education in safe removal of amalgam. I alsoÂ use saunas, which helpÂ detoxification by sweating out the toxins through my skin.

After some years ofÂ undergoing detoxifying treatments, I had fewer tremors and was less rigid, but I still suffered from fatigue.

My test showed an allergic reaction against gold, nickel and cadmium and treatment protocol wasÂ removal of a dental gold crown, which wasÂ replaced with plastic.Â Â Now,Â I try to avoid nickel and to eat more organic food to avoid cadmium. Luckily I have been rewarded for my efforts as my fatigue has decreased.

Today I can honestly say that testing and treatments for my chronic cumulativeÂ toxicity hasÂ beenÂ successfulÂ forÂ revealing some of the causes of my Parkinsonâ€™s disease.Â However,Â I still have slightly high levels of copper left and in Autumn 2006 and Spring 2008 tests show that IÂ am alsoÂ burdened with lead and aluminium.

I do not dare to think about how my life would have been without detoxifying treatments!Â Â When I look at other patients with Parkinsonâ€™s disease who are getting worse, I haveÂ even moreÂ reasons to be thankful for my health, which continues to improve as time goes on.

Where do these Heavy Metals come from?

In my case, mercury and copperÂ wereÂ likely to have come from my amalgam fillings. Copper-amalgam contains a high percentage of copper and I had many fillings in my milk teeth. Even later in school I had many cavities, whichÂ wereÂ restoredÂ with amalgam. The dentist said that I had weak teeth.

AsÂ an adult,Â I have only had one cavity, so I might think that my parents were not good at helping me with tooth brushing and perhaps also the school dentist has been tempted to do fillings, which were not necessary as she was paid for the amount of pupils’ cavities that she restored.

In addition I have in my job as a veterinarian, been exposed to many thermometers, which sometimes break and where the mercury ended up in the bottom of the car. Veterinarians were not properly informed that this could constitute a health hazard at that time.

Moreover Mercury can come from vaccinations containing the preservativeÂ Thiomersal (ethyl-mercury). Mercury might also come from environmental pollution and intake of fish. Copper might come from use of copper spiral (anti contraceptive) and from drinking water and food. The Danish Agriculture Production uses 550 tons of copper yearly andÂ this copper could be assumed to spread to the environment and end up in drinking water and food.

WhenÂ a person is burdenedÂ with mercury toxicity, then the excretion of copper is decreased.

Concerning the nutrition I would recommend the book by Jean Carper – â€œYour Miracle Brain.â€

Physical activity has been an important part of my life.

At the beginning of my disease I walked without swinging my right arm and I stumbled rather often. After years training trying to walk normally with swinging my right arm, I have succeeded, but only when I am not too stressed or exhausted. The principle is like this, if I can walk one step with swinging the arm, then I can also walk 3 stepsâ€¦.. or also walk 5 minutesâ€¦or 5 kilometres and so on.

I also use visualization when training my movements.

People, who do not realize the effects thatÂ Parkinsonâ€™s disease has on their own body, often have problems understanding how demanding it is for a Parkinson patient to cope with conscious movements. Even something as banal asÂ cleaning your shoes on a doormat is not necessarily functioning automatically but needs mental work, like steering a toy car with a joystick.

It is very common that a Parkinson patient with timeÂ develops a forward bending posture and some years ago I hadÂ thoracic Kyphosis and could not wear any of my shirts anymore. A physiotherapist has taught me some physical exercises, which I since have done every day.

Today my back is straight again, which makes me happy. People, who are happy,Â often haveÂ a straight posture, while sad and grieving people often have a crooked posture. By choosing body posture you can also indirectly choose your emotions.

I enjoy sending a signal that I am bubbling with joys of life.

I try to avoid, if possible, all kind of stress. Now I choose calm classical music instead of rock; I value tight relationships instead of having a circle of acquaintances with ‘small talk’ andÂ I love being out in nature instead of taking city walks. It is a pleasure for me to do meditation and to sing.

I have alsoÂ improved atÂ listening to the signals from my body and I take care to rest and sleep when needed. Â I have also improved at learning to avoid doing things, which I dislike and instead I do things that make me happy.

When being diagnosed with a chronic disease the patient often goes through a life crisis and so did I. The crises made me more religious and I learnt to pray to my God from the bottom of my heart â€“ this has given me spiritual power to cope with life and the new circumstances.

‘Where there is willpower, there is a way to go.’ This phrase was said about me by a good friend, as a way to expressÂ how I cope with my disease.

Years ago the neurologists said several times that I had got Parkinsonâ€™s disease and that this disease is chronic, impossible to cure and progressive. I thought that it might be like this for other patients, but that it would not be like this in my case. By working and studying a lot and sometimes by choosing blind paths, I have succeeded in finding a tiny little path out of my disease. Today I have fewer symptoms than in the year 1998, which means that the expression ‘progressive’ cannot be used generally about all patients with Parkinsonâ€™s disease.

IÂ retired in the year 2001 when I was 44 years old and although it was really a hard time, today I feel that I have a good life. To my co-patients I will say:-Â Â “Search for knowledge and keep on trying to search for new possibilities.”

Generally I recommend neurological patients to be tested with a chelating agent for chronicÂ toxicity with heavy metals. IfÂ this is diagnosed, then it is possible to de-toxify, which can give hope to a future of increased health and decreased neurological symptoms.

If you want more information aboutÂ toxicity with heavy metal and Parkinson’s disease then use the Internet.

Thank you for reading my case-story and I wish you all the best.