Hooray I say. We can all celebrate still another story of recovery from Parkinsonâ€™s disease. Manfred Poggel is German, but his story is now available in a Kindle English ebook: Parkinson’s disease- How I was Healed Without Chemicals 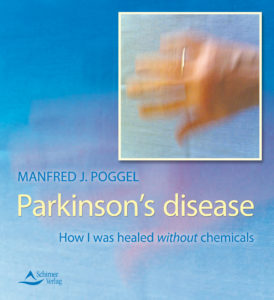 Poggel shares his experiences with using over 30 different therapies. Moreover, he describes his very personal way to recovery through approaches like de-acidification, meditation, acupuncture, homeopathy and many more. His main concern is to show ways of early detection and prevention.

An edited version of his kindle ebookâ€™s description follows:

â€œFrom 2002 onwards, his Parkinson’s disease became so severe that by 2003 he was no longer able to work. The dreaded diagnosis of Parkinson’s disease was officially confirmed in 2004â€¦He began his search for effective healing at the end of 2006. After phasing out the use of chemical medications, various connections between causes and effects became clear.â€

â€œHe recorded and checked all of the tips he was given and evaluated them for himself. It was a difficult process. It was not easy to choose the therapies that were right for him. Nevertheless, he dared to try them because he always, always had the feeling that he was being guided and that he would become healthy again.

â€œIn autumn 2010, he was finally able to stop using his natural therapies. Today he can say that he is healed. He has overcome not only Parkinson’s disease but also all other illnesses from earlier in his life. Over these years he learnt to change his lifestyle and diet.â€