Would you please send me information about the Parkinsons Energy Project in Portland, Oregon involving study volunteers who did not take Sinemet and received craniosacral treatment?

I have eschewed Sinemet for four years of my PD. And any other long term non-Sinemet using studies?

Results of the Parkinsons Energy Project were remarkable given the short time frame – only 4 months –
and the limited number of treatments offered. Outcomes were documented quantitatively using well accepted  research instruments and qualitatively using interviews and pre-post videos of motor functions.

I invite you to examine the videos below that show changes in motor functions for several study volunteers that gave us permission to make videos of them public. None of the study participants were on medications so the differences are not due to the effects of prescription medications which can affect how a person feels when they are effective (during the “on” condition) and then they are not
(during the “off” condition).

By any-one’s standards, examination of the videos below shows dramatic improvements in motor functions. There is hope of relief from symptoms!

A video of Mary Before the 6 treatments

A Video of Mary After the 6 Treatments

A Video of Steve Before the 6 Treatments

A Video of Steve After the 6 Treatments

A Video of John Before the 6 Treatments

A Video of John After the 6 Treatments

A Video of Bob Before the 6 Treatments

A Video of Bob After the 6 Treatments

The encouraging results of the Parkinsons Energy Project (PEP) inspired the development of information, resources and programs that you now find on the Parkinsons Recovery web sites.

You also asked about studies for people not on Sinemet. I have been searching the literature, but they are very hard to find. Most control groups receive some form of drug therapy.

I did find one study of a control group not taking Parkinson’s medications. This study found a worsening of symptoms of about 13.5% a year.

Zero Point Healers was asked by a support group in Portland, Oregon in 2005 to conduct a study that evaluated the effects of craniosacral therapy on the symptoms of their members. Members of the support group elected not to take prescription medications for Parkinson’s and were
specially interested in exploring treatments and therapies that might potentially offer relief from symptoms. No member of the support group had any prior experience with craniosacral therapy.

Eleven support group members volunteered to participate in the PEP study. Six 30 minute treatments
were given every two weeks. One study volunteer dropped out at the mid point of the study because
doctors determined his symptoms were caused by Lyme disease.

Treatments were administered by 2 or 3 persons (Deborah Russell, Ann Egerton and Robert Rodgers) who are all certified craniosacral therapists and Brennan Healing Science practitioners (which is a form of energy work that is complementaryto craniosacral work.)

Design of the PEP Study

Reliability of both instruments is well documented in the research literature on Parkinson’s.  Instruments were completed by participants before treatments began (the baseline), at the mid point, and after all six treatments had been given (the post-test).

Video tapes were also taken of 10 motor functions at the beginning of the study and at the end for purposes of comparison. Results of the videos of motor functions were consistent with the quantitative findings.

I will first explain what craniosacral therapy does and why it applies to Parkinson’s. I will then summarize the findings of the PEP study.

One woman with Parkinson’s who found
relief using craniosacral therapy
summarized the nature of the treatments
beautifully:

“It is hard to believe anything is really
happening, but it works.”

The work is very gentle. The person
typically lies down on a comfortable
table such as a massage table.
Craniosacral treatments are not like
a massage. The nature of the touch
is very, very light and gentle.
The person remains fully clothed.

Energy work and craniosacral therapy
facilitate the body’s natural ability to
unwind and release any tension that is
trapped throughout the body. They
help the neural system rest and
rejuvenate.

The intent of craniosacral therapy is
to work with the body so that tension
and trauma trapped at the cellular
level can be released. Therapists
are trained to “follow the body” as
they allow tension and stress to be
released from the muscles and tissues.
The process is best described as one of
unwinding tissues that are tightly
entangled with too much tension.

Trauma to the body is analogous to a
wet wash rag that has been twisted so
many times that all the water has been
squeezed dry.  After the rag is exposed
to the hot sun it dries out and becomes
hardened and inflexible. This is what
happens to tissues that have been
traumatized. Craniosacral therapy
softens and helps hydrate the tissues so
that they can be properly nourished.

After talking with many, many people with
Parkinson’s I have concluded that stress is a
key factor that aggravates symptoms. When
stress can be relieved, symptoms get better.

Person after person in my interviews
tell me the same thing: There is a direct
correlation between stress and their symptoms.

When their symptoms flare up, people
report they are always under more stress.
When they are able to find ways to get
relief from the stress, symptoms become
less troublesome.

Stress creates inflammation throughout
the body which is the basis for many chronic
diseases. Reduction in inflammation is a
key reason for the improvement in symptoms.
Here is the sequence: (1) Craniosacral work
releases stress. (2) Inflammation is reduced.
(3) Symptoms are relieved.

Craniosacral therapy is only one way
to help relieve stress. There are also
other excellent methods that help to
relieve stress, but we zeroed in on
craniosacral work as the intervention
of choice in the PEP study.

Life experiences can be so traumatic
that they have a long lasting effect on the
body. The source of trauma varies widely,
but can involve the early and untimely
death of a parent, service during wartime,
physical or sexual abuse to a child,
automobile accidents, head injuries – you
name it.

I was discussing trauma this week to a
Parkinson’s support group when one woman
raised her hand.

“I know an example of this. I have a friend
whose son committed suicide.  His symptoms
flared up two months later.”

Regardless of the source, trauma makes the
tissues throughout the body freeze up.
Tissues in many people with Parkinson’s feel
much like concrete after it has hardened.

Many adults (myself included) have held
the belief that if we are able to function in
the world as adults by educating ourselves,
getting good jobs, and making a contribution
in our respective fields, we have overcome
any and all traumas we experienced as a child.

I  personally convinced myself for
5o years that I could “will” traumas
from my own childhood to vanish into
thin air. Speaking from personal
experience, I must confess this
plan was a big flop.

What I now know to be true is
that traumas from childhood
(and traumas we experience as
adults) have a permanence about
them.  Traumas reside inside our
cells as we age. They get stuck in
our tissues and settle in for the
long haul. This is why our issues
are in our tissues.

When a threshold level of trauma and
stress is reached the body becomes less
and less able to tolerate it. The good news
is that it takes time for the hormones in
the body to become seriously imbalanced.
It should thus come as little surprise that it
also takes time for hormones to come back into
balance.

Findings of the PEP Study

Findings of our study showed that craniosacral
work did help to relieve symptoms.  Quality
of life of study volunteers did show
impressive improvements.

Study volunteers were able to do things that
they had previously been unable to do. Here
are some examples:

We observed other positive changes from
one treatment session to the next including:

Craniosacral therapy clearly had a positive impact
on the overall health and well being of Study
Volunteers.

The higher the score, the worse the condition.
That is to say, study participants got better
on average. Some experienced significant
improvements. Further analysis of the data
showed that study volunteers improved on
all three sub-scales of the UPDRS
(Activities of Daily Living, Mental, and Motor).

Most people believe that the symptoms of
people with Parkinson’s are “destined” to
progressively “deteriorate” over time. Results
of the PEP study refute this widely held belief
and show it to be false.

The improvement was remarkable in that the
intervention was very modest, involving only
6 treatments lasting 20-30 minutes each.

Changes in Symptoms. We also asked
Study Volunteers to report on 62 symptoms
before the study began, at midterm and at
post test. Analysis of the data indicated
that there was an improvement or no change
in 75% of the symptoms we tracked.

For many of the symptoms, the color of the
dot that is furthest from the center (reflecting
a worse condition) is red. Note that the plot
point in blue that represents the symptoms
at the end of the study are usually closer to
the center than the baseline in red. This
indicates an improvement in symptoms. 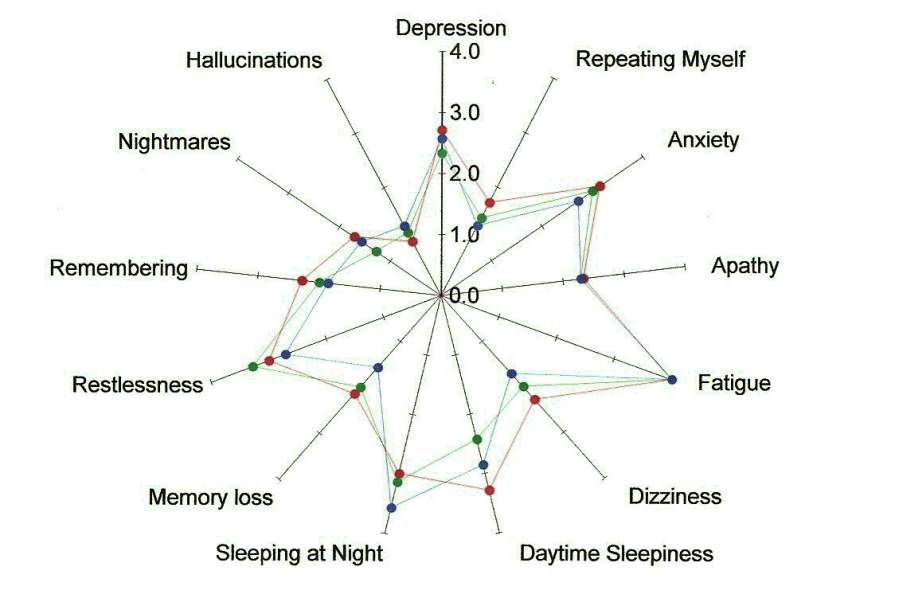 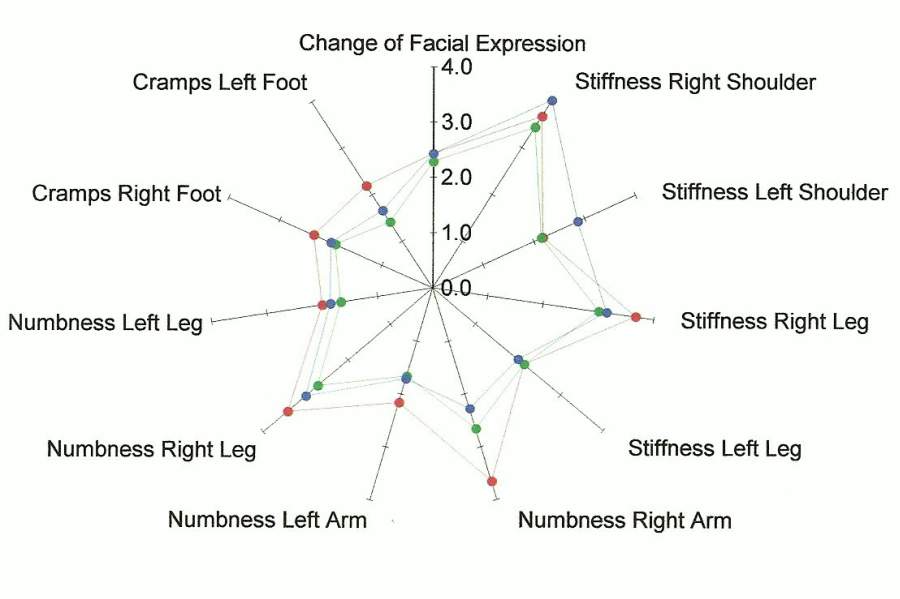 Parkinsons Disease Questionnaire 39.
We also administered a third instrument –
the Parkinson’s Disease Questionnaire 39.
Among the sub-scales analyzed from the
data reported on this questionnaire,
improvement was seen in two categories,
no change was seen in four categories and
Study Volunteers were slightly worse in
two categories. Again, these findings refute
the conventional expectation that most
persons with Parkinson’s always get worse.

All sources of evidence including
quantitative data and qualitative
observations showed the same
result.  It is possible to find relief
from the symptoms of Parkinson’s.
Parkinsons Energy Project (PEP)
study results suggest that craniosacral
therapy can be useful in helping to
relieve the symptoms of Parkinson’s.
These results suggest releasing
stress does make a difference.